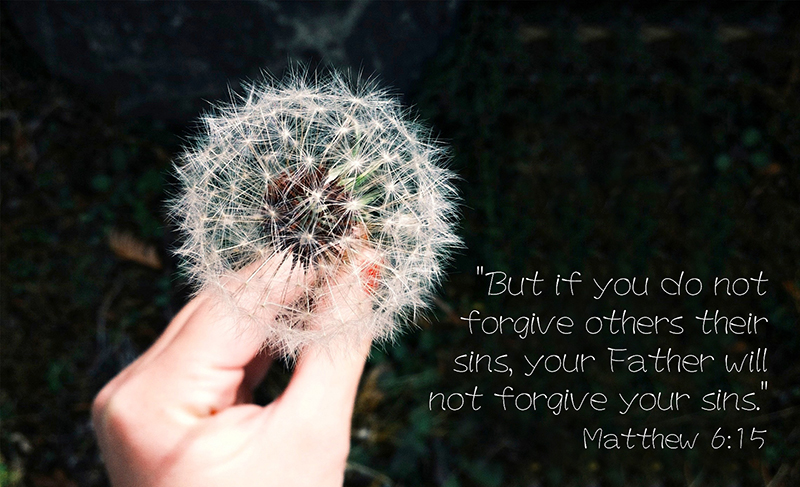 Everyone knows what forgiveness means, and we usually have no problem instructing others to practice forgiveness. “But if you do not forgive others their sins, your Father will not forgive your sins.” (Matthew 6:15)

For 35 years, I was angry with someone I do not even know. During last year’s summer retreat, a brother in Christ pointed out that the true problem was not that an airline employee declined to grant my request to seat my elderly grandma in an aisle seat. Instead, the problem was me. For 35 years, I relived this incident in my mind many times. No matter how hard I tried, I just could not get rid of it.

Someone once asked me why I felt so much resentment. I could not even answer this question. Maybe I had a very close relationship with my grandmother. She raised me and experienced numerous hardships throughout her life. When she grew old and was nearly blind, I became her human cane, going everywhere with her. Maybe I just did not want to see my grandmother suffer, not even a little. As a result, I blamed everything on that airline employee. Because I held on to this resentment, deep inside I knew that I would not be able to go back to confront the employee and demand an answer. The worst part was that the airline employee did not even know that I was still angry with him years later. At that point, I realized that I became the biggest fool in the world for wasting so much of my time, my feelings and my life on this meaningless issue.

Every time that scene returned to my mind and every minute I spent thinking about it, I brought myself back to the past and relived that painful moment over and over again. Because of this emotional baggage, I could not enjoy my life in the present, much less plan for a happy future.

When Nelson Mandela was released, before he walked out of the prison’s front door, he said these famous words: “I have decided that I must leave my pain and anger behind me in this prison; otherwise I would just lock myself up in my own prison.”

When the Holy Spirit shone its light on me, I finally learned to let go, laying down the resentment that entangled me for so long, and now I am free.