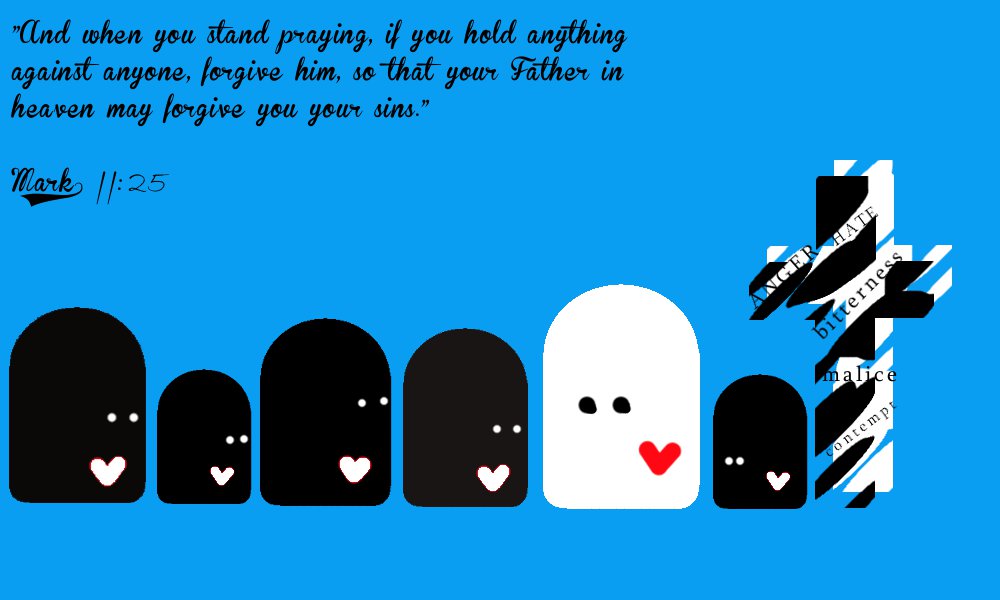 “Then Peter came up and said to him, “Lord, how often will my brother sin against me, and I forgive him? As many as seven times?”‘(Matthew 18:21).

In a frustrating situation, you make a choice between responding with anger and responding with grace. Whether it is through interactions with siblings or observations of other kids at school, most of us learn at a very young age that the world is not perfect and neither are the people in it. When things do not go as planned, the easiest and most intuitive response is anger, but that is not a response that pleases the Lord.

Christ’s sacrifice on the cross provides us with the deepest form of forgiveness; by offering up His life as an atonement for our sins, Christ extended complete forgiveness to mankind for all transgressions past, present, and future. He did this for us, knowing that we would continue to sin against Him. He did it as an immeasurable act of grace towards humanity. He humbly took on suffering for a people that would continue to reject Him.

Christ’s forgiveness of us provides perspective for our forgiveness of others. In Matthew 18, Peter asks the Lord this question about forgiveness, and Christ responds by saying, “I tell you, not seven times, but seventy-seven times” (18:22). After saying this, He presents the parable of the unmerciful servant, in which a servant whose king frees him from an unthinkably large debt; after being freed from his debt, the man hunts down his own servant, who owes him a tiny fraction of what he himself owed to the king, and has the servant thrown in jail when unable to pay. When the king hears of this, he calls the first servant wicked and sends him to jail.

Forgiveness is a discipline that must be practiced by one who professes Christ. People will test your nerves. They will offend you, hurt you, betray you, and anger you. But whenever you feel entitled to hold a grudge, remember that you, in your sinful nature, do all of those same things to Christ, who offers you unrelenting forgiveness regardless.

The steadfast forgiveness of the Lord never ceases. Let this be said also of you.

About the Author
Lara Tovmassian graduated from Biola University in May 2013 with a degree in English: Writing and a minor in Sociology. She is passionate about serving the Lord with her skill of writing and has joined the RE:NEW Communications Team to assist with the writing and editing of ministry materials. During her free time, she enjoys cooking, reading, and spending time with loved ones.

About the Artist
Shirley Lu is a devoted Christian committed to living her life for God. She serves at church as a nursery helper, worship leader, and youth group leader. She believes she would not be anywhere in life without the mercy of God and thanks Jesus everyday for saving her. Shirley enjoys playing sports, listening to music, and going on adventures. She hopes to have a career helping people in the future.